The Pros and Cons of Push-Ups

Push-ups are generally a great strengthening exercise for your upper body and shoulders but poor technique and over doing them can lead to injury.

Our injury of the month winner is certainly suffering from doing too many push-ups during basketball training.

A fit and extremely dedicated 14 year old was asked to perform 50 push-ups during training. They started to hurt, he started to struggle and the coach instructed him to drop to his knees to finish them. Not known for giving in or taking the “soft option”, he  chose to push those 50 out. 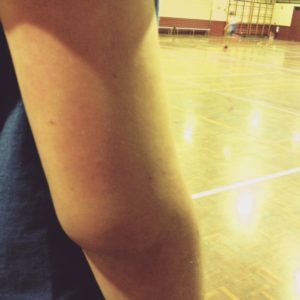 Obvious swelling in the back of the arm or Triceps area, 2 days after performing 50 push-ups.

The next day and for the next 4 days, he couldn’t lift his arms, he couldn’t even bend his elbows to eat! There was marked swelling throughout his triceps muscles at the back of his upper arm. The photo is 2 days after the event when his Dad asked me to have a look to see if he should be worried. Clinically it looked as if all the muscles were still intact but the poor triceps had been overloaded to the point where they were inflamed and he had severe delayed onset muscle soreness or DOMS. I had never seen this amount of swelling however in a muscle that hadn’t been torn so I suggested he see a Sports Doctor and get an ultra sound to check if there was any muscle damage. The Sports Doc and the Radiologist had also never seen anything like it. They were concerned that the amount of swelling in the arm may be compressing vital blood vessels and nerves resulting in Compartment Syndrome.

Fortunately, the scans cleared him of any tissue damage and with continued ICE, antiinflammatory medication, compression, elevation and gently stretching his arm , the swelling started to subside and movement returned. Six days later he returned to playing for a half but his throwing and shooting distance was still compromised.

So for those young dedicated athletes out there, be kind to your body. Once you start to lose technique you either need to STOP or MODIFY the exercise to avoid injury. Push-ups can hurt your neck as you start to poke your chin forward towards the ground rather than using your arms to lower the whole body. Shoulder blades will start to wing off your chest wall which loads up the small muscles in the shoulder. Coaches also need to be aware of injury risks especially with young bodies. They can do the push-ups but try 3 sets of 15 with a run around the court between each set as their punishment if they aren’t listening. If you can see they are struggling, get them to do them on their knees, on a chair or even against a wall.